The Coming Kingdom of the Messiah A Solution to the Riddle of the New Testament: Sir Anthony F. Buzzard 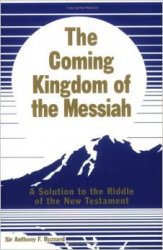 There is an impressive agreement among New Testament scholars that the Kingdom of God was the principal theme of all that Jesus taught. What Jesus meant by the Kingdom, however, remains a puzzle both to commentators and Bible readers. Since the Kingdom of God is the heart of the Christian Gospel, any uncertainty about Jesus’ core concept will mean that the whole issue of salvation is obscured.

Readers of the Bible are often unsympathetic to Jesus’ Jewish Messianic outlook. His claim was to be the Messiah, a highly charged political title meaning that he believed his destiny was to rule the world from Jerusalem, bringing peace and order to the whole of mankind in a renewed earth. New Testament Christianity thus presents the only realistic hope for the resolution of the world’s chaotic condition.

Anthony Buzzard contends that contemporary preaching reflects a longstanding and confusing tradition of ignoring the saving Gospel of the Kingdom as preached first by Jesus and then by the Apostles. In church circles Jesus’ death and resurrection have been wrongly presented, with an appeal to isolated verses in Paul, as the entire Gospel. But this is to overlook the obvious fact that there are thirty chapters of Gospel preaching in Matthew, Mark and Luke in which the death and resurrection of Jesus are not even mentioned. Something is seriously awry with a “Gospel” which fails to include the Kingdom of God as its central element. The results of a “gutted” Gospel are apparent in the currently fragmented and weakened church.

Jesus shared with the prophets of Israel the vision of a coming new era of peace for all mankind. As Messiah appointed by the One God of Israel he confidently expected to return to the earth, overthrow his enemies and govern the world. The biblical Jesus is far removed from the ethereal figure presented in much Christian literature and art. He was a genuine human being, and a career preacher, as was Paul, of the Kingdom of God Gospel, the message of salvation by which men and women are invited to prepare now for entrance into the Kingdom of God which will be inaugurated on earth at the Second Coming of Jesus. The Messiah’s Gospel challenges us all to embark on the journey which leads to immortality and an administrative, servant position in the coming Messianic rule.