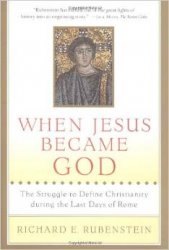 The life of Jesus, and the subsequent persecution of Christians during the Roman Empire, have come to define what many of us know about early Christianity. The fervent debate, civil strife, and bloody riots within the Christian community as it was forming, however, is a story that is rarely told. Richard E. Rubenstein takes readers to the streets of the Roman Empire during the fourth century, where a divisive argument over the divinity of Jesus Christ was underway. Ruled by a Christian emperor, followers of Jesus no longer feared for the survival of their monotheistic faith, but they found themselves in different camps—led by two charismatic men—on the topic of Christian theology. Arius, an Alexandrian priest and poet, preached that Jesus, though holy, is less than God, while Athanasius, a brilliant and violent bishop, saw any diminution of Jesus' godhead as the work of the devil. Between them stood Alexander, the powerful Bishop of Alexandria, in search of a solution that would keep the empire united and the Christian faith alive.