Glory to God in the Highest Removing the Influence of Socrates, Plato, Philo and Greek Philosophy from Christian Doctrine 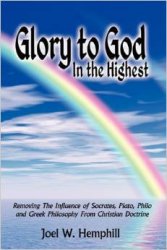 "We are celebrating the release of Joel’s new book, “Glory To God In The Highest.”

It is a 520 page work filled with scriptural and historical insights regarding the truth of the One Most High God and his supernaturally conceived, virgin born, human son, our Savior Jesus Christ.

In my studies I have been astonished to find that according to Edward Gibbon, Will Durant, and other noted historians, Plato was teaching the doctrine of the divine Logos and the doctrine of the Trinity, at his university called the Academy in Athens, Greece, 375 years before the birth of Jesus Christ!

It was several hundred years after the death of the last Apostle, before these Platonic doctrines made their way into Christianity, through the Greek “church fathers,” followers of Plato who had “converted.” They were established at two church councils: Nicea (325 A.D.) which decided that in addition to the Father, Jesus is the “second Deity,” and Constantinople (381 A.D.) which proclaimed the Holy Spirit as the third person of God, who“with the Father and the Son he is worshiped and glorified.” This flies in the face of Moses’ statement in Deuteronomy 6:4, which was endorsed by Jesus himself in Mark 12:29:“Hear, O Israel: The Lord our God is one Lord.”

To deny the conclusions of these councils which were called by the Roman emperors Constantine and Theodosius, was to be punished by banishment or death. As Thomas Jefferson said, “The Trinitarian idea...grew in the blood of thousands and thousands of martyr’s.” These things I will prove in this book.

It is past time to re-examine those doctrines in the light of Holy Scripture!"