Divine Truth or Human Tradition? A Reconsideration of the Orthodox Doctrine of the Trinity in Light of the Hebrew and Christian Scriptures 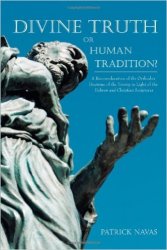 In Divine Truth or Human Tradition? the author critically examines the viewpoints and Scripture expositions of prominent evangelical scholars and apologists-including Dr. James R. White (author of The Forgotten Trinity), Dr. John MacArthur (President of The Master's Seminary), Wayne Grudem (author of the widely-read Systematic Theology), Robert Morey (author of The Trinity, Evidence and Issues), Robert L. Reymond (author of A New Systematic Theology of the Christian Faith), and others . . . According to what has long been considered mainstream Christian "orthodoxy" the doctrine of the Trinity (the idea that the one God of the Bible is a singular being made up of three coequal and coeternal persons) is not only central to the Christian faith, but even necessary for one to accept in order to be counted as a true Christian and be saved. Such a demand on a Christian's faith has come across as strange and perplexing to many, especially so in light of the fact pointed out by one respected Trinitarian: "[The Trinity] is not clearly or explicitly taught anywhere in Scripture, yet it is widely regarded as a central doctrine, indispensable to the Christian faith. In this regard, it goes contrary to what is virtually an axiom [that is, a given, a self-evident truth] of biblical doctrine, namely, that there is a direct correlation between the scriptural clarity of a doctrine and its cruciality to the faith and life of the church" (Millard J. Erickson, God in Three Persons, p. 11. Emphasis added) Understandably, this fact has raised questions in the minds of Christians and truth-seekers alike ever since the doctrine was first articulated in the late 4th century. Many Christians have wondered: How can a doctrine that is not clearly or explicitly taught in the Bible be necessary to accept in order to be a true practitioner of the Christian faith?