They Never Told Me This in Church! Second Edition 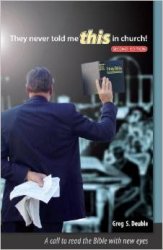 There is a consensus among many New Testament scholars that much of what the historical Jesus and his apostles taught has been submerged by an influx of post-biblical tradition. Subtle foreign influences, mostly from pagan Greek philosophy, which neither Jesus nor his first-century followers would recognize or endorse, have obscured the original Gospel as Jesus preached it. Most churchgoers accept without question, unbiblical traditions which they have never seriously investigated.

In They Never Told Me This in Church! Greg Deuble invites the reader to a careful re-examination of "the faith once delivered" in the light of the Hebrew heritage which formed the framework of all that Jesus taught in regard to himself and his Gospel mission.

From the Foreword: "This does not mean at all that Greg has given up faith in holy Scripture. Far from it. There is nothing trendy or gimmicky in his approach. Rather, he has learned to read the Bible from its own Hebrew perspective, and shedding a large quantity of traditional baggage has made the Bible all the more brilliant and telling. Because he is an honest student of truth, Greg has been rewarded...with unusual insight. He has a knack of getting to the heart of the issues. He has brought in a wealth of modern scholarly support for his argument, and the quotations gleaned from his wide reading are impressive. He adds a pleasing dose of Aussie humour to his writing while he invites us to re-examine all the major issues of biblical theology. The personal warmth of the author and his pastoral touch are evident in all he writes."

They Never Told Me This in Church! will inspire and challenge all who claim devotion to Jesus, and many who are searching for the meaning of his role in history. They will be enabled to read the Bible with new eyes! The confused state of divided Christendom in our time demands just such an honest and radical investigation.