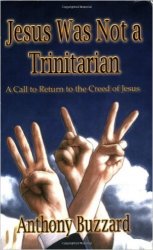 There is a growing concern among evangelical scholars that evangelicalism, its doctrine of God and of the Gospel, may not be as securely rooted in Scripture as is often uncritically imagined. The accounts of the historical Jesus and his saving teaching, given us in three corroborating reports in Matthew, Mark and Luke, are often played down in favor of a set of verses from the letters of Paul. That "treadmill" of favorite evangelical proof-texts also relies heavily on John's Gospel. This unbalanced use of Scripture results in a distortion of Jesus' claim to be Messiah, Son of God, in relation to his Father whom he defined as "the only one who is truly God" (John 17:3).

The crux of the problem lies in this fact: Jesus' own very Jewish creed, which he affirmed as the most important truth of all in agreement with a Jewish scribe (Mark 12:28-34), has been allowed no voice in the traditional creeds recited in Church. Worse still, when the unitary monotheistic creed of Jesus and Paul is advanced as the necessary bedrock of good Christian thinking, its exponents are likely to be charged with upsetting the longstanding findings of the church councils. They are even made unwelcome in church settings.

Anthony Buzzard invites scholars and laymen alike to take seriously Jesus' Jewish creed, his recitation of the Shema, "Hear, O Israel," which proclaims God to be one single Lord. Defining God and His Son biblically remains part of the unfinished work of the Reformation. The evidence placed before the reader shows that a major paradigm shift is needed if Christians are to worship their God in spirit and in truth, uncluttered by the philosophical and confusing ideas of God which form part of received church tradition. Buzzard's thesis has enormous significance for the discussion among three great world religions -- Christianity, Judaism and Islam.